Undoubtedly the most action-packed adventure Will and I have achieved to date, the 10-mile hike along the Clear Lake, Point Sublime and Ribbon Lake loops on the Wapiti Trail in Yellowstone National Park holds the top spot from our recent trip. Bears, angry moose, bubbling mud pits, a geothermal canyon…are you getting the vibe?

Let me help you – it was somewhere between ‘Are we going to die?’ and ‘Is this still Earth?’ 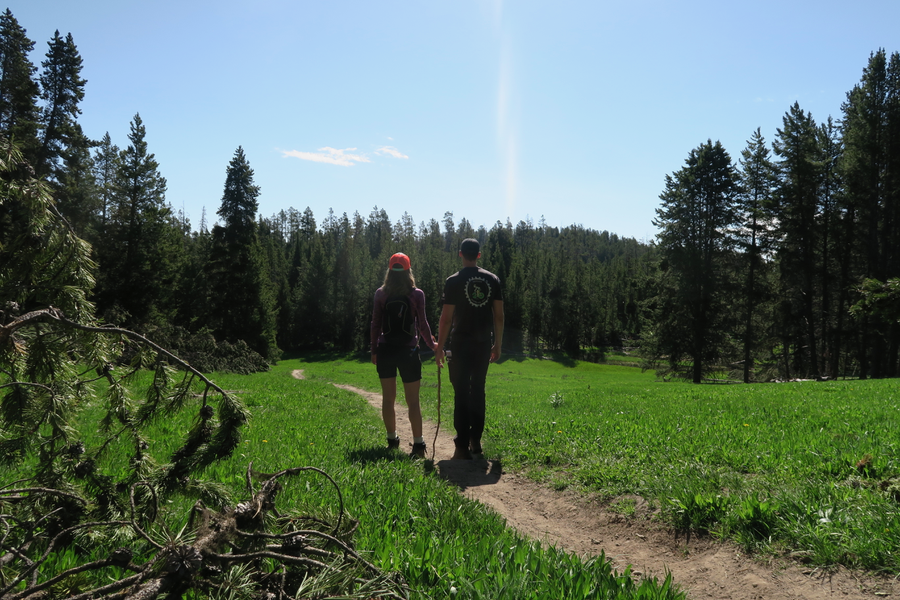 It began with a glorious 9am start from the Wapiti Trail head near Canyon Village. After crossing an open expanse of rolling, slightly uneven field, we veered left at the crest of a hill towards Clear Lake and promptly found ourselves in forest within sight of several gently grazing does. The weather was ideal, sunny yet wonderfully temperate with a light breeze. Clear Lake was not far, only about a mile in, and was stunning. I like that in this part of the country, most lakes are named rather obviously. This one being, you guessed it, exceptionally clear, despite smelling strongly sulphuric and riddled with minuscule bubbling features rising from the hot springs that created and feed the lake.

We took a moment to enjoy the stunning scene before us and appreciate the cloudless sky above us, but from here, things got really interesting.

Shortly beyond the lake, we found ourselves gripped in fear by dust and grunts coming from around a sharp bend in the path. Cap came off the bear spray can and Will held it at the ready as we stood rooted to the spot, trying to assess what beast was agitated around the corner and coming quite firmly to the conclusion that it was a bear, then quite firmly that it was a moose, then not so firm about anything at all.

We sheathed our bear spray and braved the turn. What we found was, while not as immediately terrifying as an agitated moose, still somewhat unnerving. A narrow pit had opened up in the earth and was emitting steam from the boiling, roiling, bubbling waters within. A thin log has been hastily, it seemed, placed in front of it as an indicator to stay out, which we happily did, though not without peering over the edge as best as we could into the depths of the pit.

An interesting sight, and we sheepishly laughed off our paranoia and the absurdity of the situation, mistaking a guttering, spluttering pit for bear or moose grunts. But then, literally only seconds after, as we turned yet another sudden corner I saw a distinct bear track and, Spidy senses tingling, glanced up at a sudden hill overlooking our path. 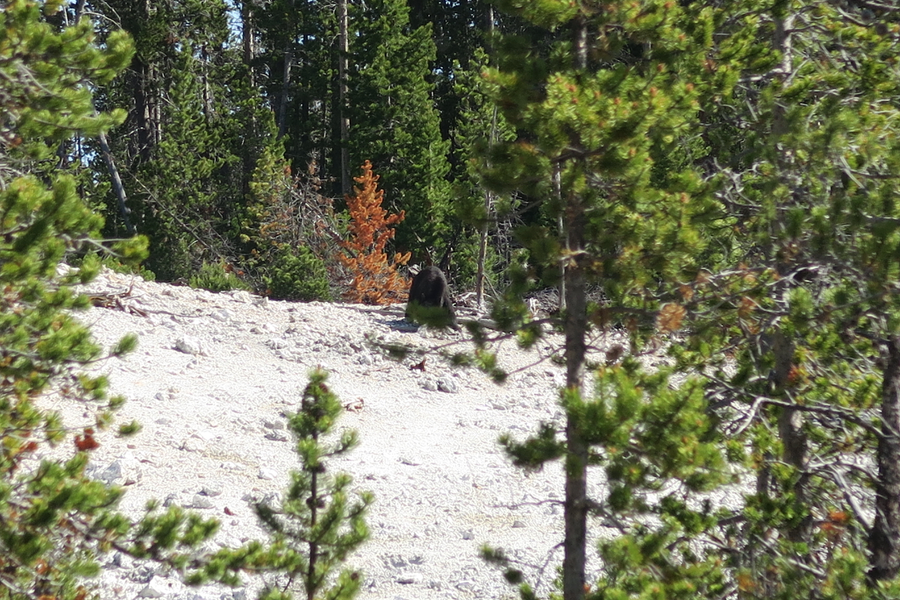 ‘Bear. Will, there’s a bear.’ After a short exchange in which I had to convince Will that indeed I was not joking in order to get him to actually look, the cap came off the bear spray again, and we found ourselves in a pickle. While we were about the 100 yards away required as per the Yellowstone Pledge, and the large black bear was peacefully grazing on dandelions, we nervously discussed what to do with no small amount of adrenaline coursing through our veins. Turn back? Well, this hike was awfully beautiful, and, as it turns out, awfully interesting, so preferably not. Call out so as to not surprise it, as per advice that surprised bears are the most dangerous ones? But then, would calling out surprise it and lead to it charging us?! We backed up a few more paces from the way we came and decided to go with calling out.

The bear lifted its great head to gaze directly at us. Oops? Have to say, few things as terrifying as having the full attention of a fully grown bear. After a few agonizing seconds, in which the bear apparently decided we weren’t interesting, he lowered his head and continued grazing. We waiting until he meandered over the hill and out of sight, then continued down the path with no small amount of lingering nerves. Our nerves quickly turned into jittery excitement as we replayed the recently passed moment and revelled in success at having seen our first bear.

But then, things only continued to get more interesting. Shortly after Papa Bear, we turned another corner to an open break in the forest in which several massive pits of bubbling mud spread amid a dry, desolate gray and white expanse arrested our attention. Sorry, did we miss the ‘Keep right to stay on Earth’ sign? 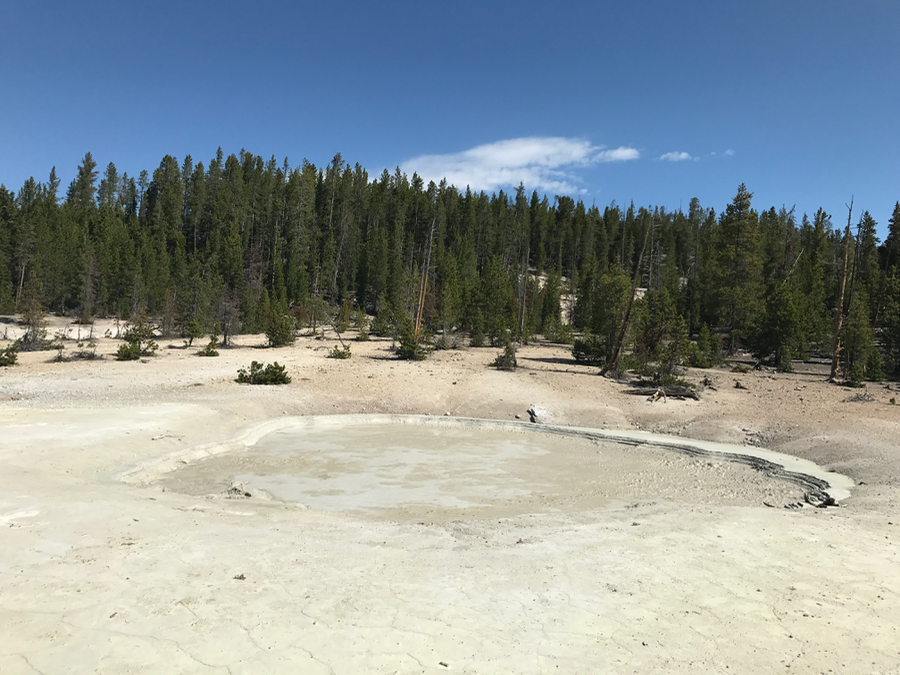 Yellowstone, wtf? You are crazy.

We continued on, sobering up from the after-excitement of our bear encounter to a realization that next time, we might not be so lucky. Having seen only one other hiking couple up to that point, who had stayed around Clear Lake, one can easily understand how bears and hikers have surprised one another, sometimes to an unfortunate end, on the backcountry trails. Our call outs of ‘Hey bear!’ came more frequently, and our eyes darted at every sound, or even at a seeming unnatural quiet that at times stole over the wood.

We carried on this way through alternating stretches of barren, geothermal expanses and forest, past Lily Pad Lake (which, as expected, was full to the brim with Lily Pads), until we emerged at a cross roads for Artist Point and Point Sublime, which just so happened to rest on the southern rim of the Grand Canyon of Yellowstone.

The geology of the canyon is fascinating, not to mention the views. Although much of this area of the world is shaped by glacial paths and activity, the canyon was actually a combined result of a fault caused by a past eruption of the Yellowstone caldera and the Yellowstone River which runs through it. Hydrothermal activity in the form of geysers and hot springs, which are still visible at times gushing out into the canyon, caused the rhyolite rock of the canyon walls to become especially soft and brittle, which has allowed the roaring Yellowstone River to erode and deepen the canyon rapidly over the last several thousand years. Careful on the edges! The rhyolite is still actually rusting, giving the canyon its characteristic yellow and red colours, and therefore still crumbling away.

We chose to follow the trail onwards to Point Sublime, a path which follows the rim of the canyon rather closely. We could see great chunks of the rock face that had crumbled away none too far from the trail path, so we were wary of our footing. After resting for a moment at Point Sublime, which lends an incredible view of the changing geology of the canyon as it shifts into darker grey rock, we headed back to the cross roads and backtracked to get on the path towards Ribbon Lake.

Being further along, this leg of the Wapiti trail is a bit less traveled. Every turn in the path was a new mystery, and more than once we were scared to bits by cracking trees. Not only because we feared a bear crashing through the forest after us, but also because you see many many dead trees fallen down along the trails. This happens for many reasons, some of which include natural forest thinning from overcrowding, ‘blowdowns’ from occasional extreme bouts of high winds, and just general old age. The trees don’t actually decay due to the high altitude and dry air, but instead lie there on the forest floor for many many years, drying up and bleaching out. The result is eerily beautiful, but confusing if you don’t know the cause beforehand. Which we didn’t.

After Ribbon Lake, we pushed ourselves onwards to Silver Cascades, but by this point I was extremely tired and hungry. We had intended to turn back sooner, but couldn’t stop ourselves from pushing ever onwards around the next bend and the next, eyes wide with all that we were taking in. After a banana and a pep talk, we started our journey back on the return end of the Ribbon Lake loop. 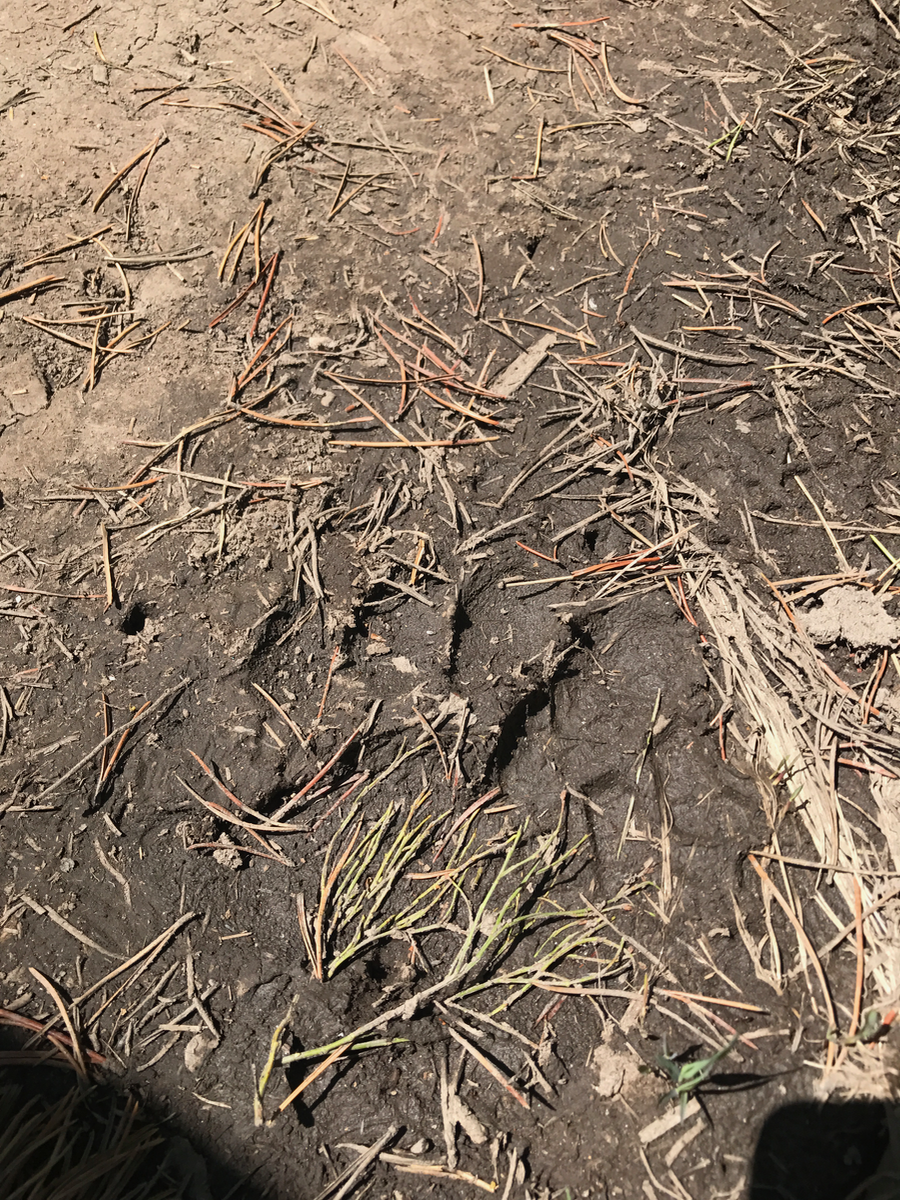 Here, we began to see more and more tracks of various wildlife. We came across some wild campers, who said they were surrounded by howling wolves at one point in the night. We saw elk several times, and I pointed out the moose, elk and bear tracks every single time I saw them to Will. That was many times. Sorry, Will.

At one point, the woods fell so silent I was convinced a bear or wolves were about to pick me off from the back, being in the weak, tired, straggling state that I was. Okay, I was convinced of that for the entire return journey, but at this particular point I was nervous. Not long after, we came upon a clearing in the forest by a small pool of water, some emergence of hot springs by the smell and look of it. It was clearly the neighborhood watering hole, as animal tracks abounded, and we saw unmistakable and disturbingly huge grizzly bear prints.

The rest of the journey included maneuverings across soggy expanses of flooded plains, an abandoned or left-for-safekeeping spotted elk fawn nestled against a fallen log, an angry mother moose that wiggled her head and ears at us rather threateningly (we’re still debating as to whether this was equally or more frightening than the bear), and a dodgy stick-balancing and rock-leaping crossing of a green, brown and yellow tinged bubbling stream, shallow but wide. The thing with any water features in Yellowstone is that you can’t trust the PH or the temperature of pretty much anything, so our policy was to avoid it as much as completely as possible. I doubted the survival of my right calf after a brief splatter at one point, but here I am, safe and whole. 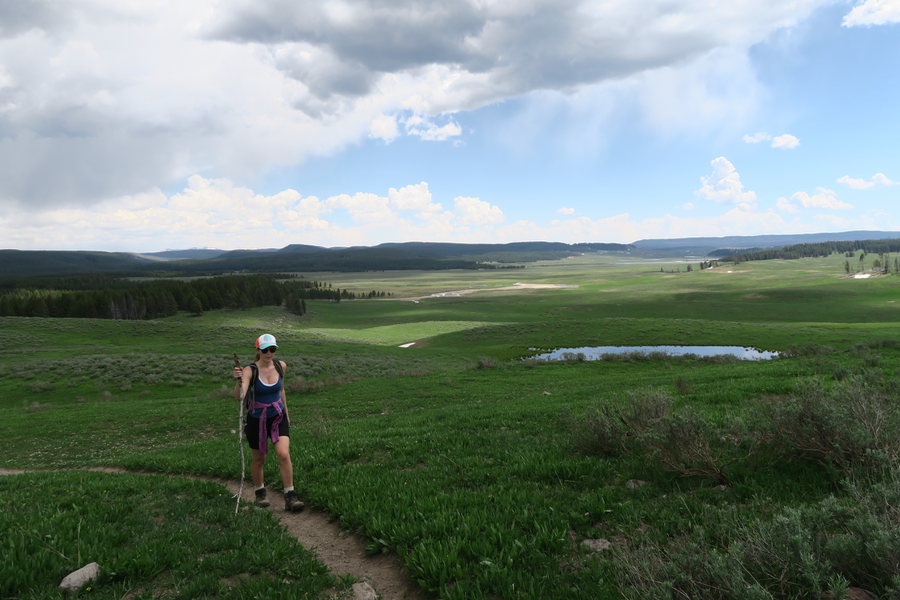 After a last journey through a steaming expanse of a barren, chemical bleached clearing followed by an open range full of bison, we eventually crested a hill to look out over the original field of the trail’s beginning. Somewhat confused by but grateful for our survival, we returned to our candy apple red mini van rental, slapped together some trusty turkey sandwiches, ripped on our boots and socks and reveled in a highly successful day of adventure.