We made our way down from Yellowstone to its glorious southern neighbor, Grand Teton National Park, for the final day of our trip. This was partly a strategic decision to place us closer to Jackson Hole Airport for our return journey. Ugh, I got so sad just typing that.

However, that’s not to say that the Grand Tetons were an afterthought or a second-best, ‘Oh, may as well while we’re here and seeing as it’s closer to the airport’ type of thing. I feel as though this is sadly often the case, as it sits in Yellowstone’s touristic shadow, of sorts. But we had been eagerly planning to spend time in the Grand Tetons from the onset (even if we didn’t find a camp spot until the day before, but that was typically what we did in each location for the entire 9-day trip). Sad as we were to leave Yellowstone, we were equally excited to gorge our eyes on the rugged beauty of the Tetons.

The Tetons are stunning, boasting not only nearly all of the very same flora and fauna of Yellowstone but also a magnificently rugged mountain range surrounded by alpine forests and lakes. Whereas much of Yellowstone is shaped by its geothermal identity, the Tetons are a fault block mountain range, caused by a shift in the Teton fault in the earth’s crust. The rock would have been suddenly thrust upward, or ‘upfaulted’, hence the lack of foothills. The range is actually relatively young, by geological standards, hence its extremely rugged appearance. Even so, glacial activity has ripped along the range, leaving jagged peaks, pristine chains of lakes and rushing creeks. So here, you may not find yourself dodging geysers, but you will still see plenty of grizzlies, black bears, elk, moose, wolves and so on. We in fact encountered a young grizzly and some black bear cubs on opposite sides of the road almost as soon as we entered the official park.

We made some camp friends at Norris Campground in Yellowstone who highly recommended the Signal Mountain Campground on Jackson Lake. So for simplicity’s sake, we took them at their word and made our way there. It was nice not to think about it, just get there, and we found a nice spot nestled in the trees but on the lake side of the grounds. While there were tons of adorable tiny chipmunks hopping around, there were also lots of mozzies, so the bug spray was essential.

Driving around later, however, we came across Jenny Lake campground, and immediately decided it was probably the superior site, particularly if you want to wake up to giant rugged mountain peaks in your face. However, a glacial dip in Jackson Lake was a main appeal of Signal Mountain. More on that later.

For our last hike of the trip, we chose an easy 4-miler along the beautiful String Lake Loop trail. For such a short distance, the hike had surprising and welcome variety. Once you get going, if you choose to take the loop clockwise, the trail really begins with the ‘Cathedral Group’ mountains (12,325-foot Teewinot Mountain, 13,770-foot Grand Teton and 12,928-foot Mt. Owen) rising up to the west and String Lake curving to the east. Mountains and lakes. My favourite nature-sandwich moment of all time? Possibly.

Along the way, we saw several curious marmots, ever the popular muses for amateur photographers, popping up in all their furry cuteness from the tangle of rocks, wildflowers and unkempt brush.  This first quarter or so of the trail is actually only so open as a result of a series of avalanches which cleared the mountain face, lending a much clearer view of String Lake from this raised perspective, but leaving behind a tangled wreckage of aspens and bramble. Fear not, however, as the trail itself here is very clear. There was still the odd lingering pile of snow from May’s sudden snow storm, so Will and I took it upon ourselves to engage in a short but sweet snowball fight. I’ll admit, I may not have performed as well as I would have liked given my attempt at simultaneously filming it with my phone, but then are there ever really any losers in a snowball fight?!

After this leg, there is a beautiful stretch of trail winding through the pine and conifer forest, climbing partly up the mountain before gently falling back around and down to the north end of String Lake and its source from the Leigh Lake Outlet.

Along the way, we manoeuvred several streams that at times flooded the trail a bit, clearly sourced from the still melting snow atop the peaks. Everyone loves an interactive water feature or two, am I right? It kept the trail interesting, at any rate, and only added to the outstanding beauty.

After stopping for some ever-faithful turkey sandwiches (or perhaps we were on ham at this point, the meats began to blur by this point truthfully) and a beer at the rushing outlet, in view of the imposing Mt Moran across the lake, we carried on the rest of the lovely trail, now flat but winding amid forest, lake and glens. Near the end, evidence of the lake’s swelling became unavoidably apparent as the lake had flooded the trail by nearly a foot, and a park bench resting in what would have been a picturesque little resting spot was inaccessible (well, if you happen to be generally in the mind of avoiding water in your hiking boots for the moment).

With a clear, sunny sky above us and fresh, spruce scented air in our lungs, the hike was absolutely ideal to experience the area. Having begun mid-morning and taking the trail at a leisurely pace (ahem, intermittent snow ball fights and whatnot), we decided to head into the town of Jackson just to see what it was about (and because we were curious thanks to a mention or two about it in the TV show Silicon Valley).

The town was charming and unique. Very western. Will bought me a bookmark with a red fox photograph on it, complete with red fox facts. Thanks Will! (This may seem trivial, but I’m an obsessive reader, so a bookmark is a valid and exciting gift for me. Go on, laugh. I have very little shame.) We had a superb coffee and an excellent freshly squeezed lemonade from some hip looking cafe with free Wi-Fi and entrepreneur-attracting cosy leather couches, though we took our drinks outside. We didn’t stay long, as we were quite tired after 9 full and wonderful days and wanted to get back to camp for a dip and dinner.

And dip and dinner we did! There is a little beach and picnic table on the lake a short way down from the marina. Here, we dashed in for a quick once-under in the glacial water and a few furious scrubs to wash away the last few days of hiking. It was painful but immensely fun at the same time, and after a few quick minutes, we dashed back out and straight into cosy dry clothes.

The darkening clouds on the horizon may have hastened our exit as well. As the wind picked up and the storm rolled in, we stubbornly continued with our plans and made dinner lakeside, using a tree as a windbreak for our mini stove. Seasoned chicken and rice, nothing fancy. Fortunately, the giant, fat drops of rain were still quite scarce, serving only as yet another sign of foreboding.

We still managed to have time for a quick campfire to get our last fix of toasted marshmallows for the trip before retiring to sleep. And not a minute too soon! The rain hit and carried on through the entire night. Falling asleep to the sound was beautiful, although I did awake in the night convinced I’d heard something large brush the tent. After lying awake for a good 20 minutes or so, during which I heard all kinds of noises including hooves galloping away somewhere in the camp site, I finally woke up Will convinced that, of course, we’d be eaten by a bear or trampled by moose on our final night. In a storm. The one night I kept my lip balm in the tent with me…

Despite my fears, however, nothing came. So I resigned myself to a fate of being eaten and fell back asleep.

The morning came fresh, crisp and sunny, a beautiful, bittersweet farewell to an experience that has shaped us and inspired us to pursue the outdoors full time.

Written By
Emily Stephens
More from Emily Stephens
Norway – where even the roads are breathtaking. Trollstigen was formerly a...
Read More 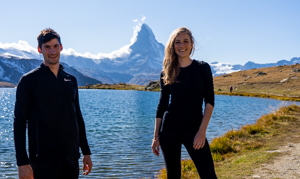